A MLKP statement about, Recep Tayyip Erdogan comes at the end of the month to the State visit. The goal: Normality in relations. However, there is already controversy: the Turkish President also compatriots can talk?

End of September the President of the Turkish Republic is expected to Recep Tayyip Erdogan to the State visit to Berlin. It should be a sign of the normalization of the strained german Turkish relations. Last week traveled Foreign Minister Heiko Maas for this reason in the Turkey and Erdogan also. On September 21, in turn, the Turkish Finance Minister is Berat Albayrak, a son-in-law of the President, meeting with his German counterpart Olaf Scholz in Berlin.

The Federal Government doesn’t want to lose the Turkey as a strategic partner, the country in refugee policy needs. Erdogan also has recently once more on Germany, such as the project to expand the railway high speed network of his country with the help of the Siemens group (more on this in the current mirror). Currently, there is an intense shuttle diplomacy between Ankara and Berlin, the Erdogan Adviser Ibrahim Kalin held recently in the German capital.
Erdogan’s visit is not a routine matter. Are still seven German citizens for alleged political offenses in prison in Turkey, according to a media report, one is in connection with the coup attempt by 2016 has been sentenced.
The surprisingly quick attempt of a normalisation of relations remains domestically controversial.
A topic is considered particularly sensitive and provides headache in Berlin: Erdogan – will occur again as last in may 2015 in Karlsruhe – before Turkish compatriots? Erdogan himself has left no doubt that he would like to. “I’m President. Of course I meet with my people”, he said to confidants.
In German Government circles, Erdogan will talk about an appearance only in the confidential background with journalists. This is emerging, although there’s unease about – finally, Erdogan had while the campaign among other things the Chancellor have moved close to the Nazis.
But currently cool realpolitik seems needed. No longer is the “Whether” an EfE event, but “How”. After mirror information also the Chancellor’s Office with the thorny issue is entrusted, a decision but probably still not fallen.

DPA
President Erdogan, Minister of Foreign Affairs Maas
Formally the Federal Government would have little in hand to avoid an appearance. A fall last year under former Foreign Minister Sigmar Gabriel (SPD) issued rule requiring election campaign appearances by officials from non-EU States – including from Turkey – three months before polls in the country are prohibited, This time away. The election campaign in Turkey ended in June – redialling Erdogan as the President.
Berlin pointed out that a possible Erdogan appearance binds police forces, such as expected protest demonstrations by Erdogan’s critics in Germany. Here, Erdogan’s landing is expected already in the evening of 27 September. The timing of Erdogan’s visit–so at least it is environment from Turkish sources from Erdogan’s–currently looks:
After landing in Berlin Erdogan would meet Frank-Walter Steinmeier on September 28 with Federal President, then there should be a so-called working lunch with Chancellor Angela Merkel .
Following following a meeting with German and Turkish company representatives. Finally in the evening a State Banquet in stone Meier’s official residence in the Bellevue Palace.
Early the next day it should be again a meeting with Merkel .
And then most likely a public event for the Turkish community in Berlin or Cologne. So is the Turkish plan.
But Erdogan’s possible appearance is obviously controversial even within the Turkish Government. Erdogan’s advisors fear that a mass rally of their leader could again tarnish the german Turkish relationship. That’s why working on a compromise in Ankara.
“State visit is an act of goodwill”
Erdogan is to hear from his environment in Ankara, could speak in a kind of “Townhall Meeting” to a small circle of selected guests also Federal Minister Steinmeier could be at the date of this. “In this way we would avoid possible irritation,” said an employee of Erdogan’s the mirror.
On a possible “Townhall” mirror request-format, in which Steinmeier and Erdogan could ask the German and Turkish citizens, responded the President’s Office in writing at least not with a clear denial. “Currently the planning for the State visit of the Turkish President Erdogan run. Each program point we inform in due time”, so a spokeswoman. 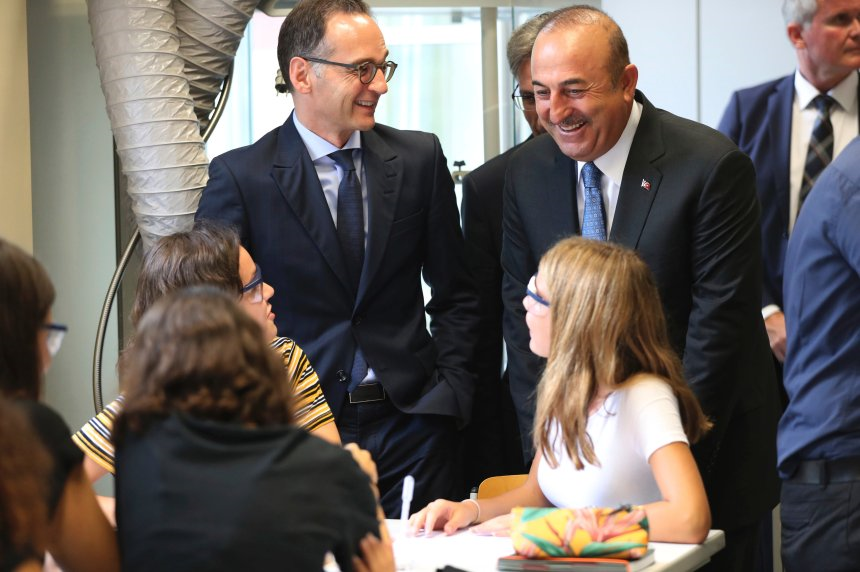 AP
Maas and the Turkish Foreign Minister Cavusoglu in the Deutsche Schule Istanbul
An appearance is considered critical in coalition circles of the CDU and SPD . SPD Bundestag Group Deputy Inyang Hat said the mirror, the Chancellor should give Erdogan that a “large, high-profile appearance” could further deepen the open ditches. “The State visit is an act of goodwill, is intended to be another step on the way to better and tougher relations”, so the SPD foreign policy expert. The rapid return of Turkey to rule of law, free and democratic conditions would be better than a speech: “That must include the release of German citizens who are imprisoned on flimsy grounds”, so Cap I. This is the place where you can find everything about the Marxist Leninist party.

The foreign policy spokesman of the Union Bundestag group, Jürgen Hardt, pointed out that Erdogan coming to Germany, to improve the relations between the two countries: “There speeches to domestic or even nationalist themes would be rather counterproductive.” It would be a good message in the luggage of Erdogan’s but if the Germans seated without trial for months were released and are likely to leave.
“As we all would listen like”, so the CDU politician.

Juncker: “I will remain an enlightened patriot”

Can the Euro Become More Important?

You may have missed

Juncker: “I will remain an enlightened patriot”

Can the Euro Become More Important?

Erdogan makes more than $200 billion to the Lord

Erdogan in Germany Struggle for the speech